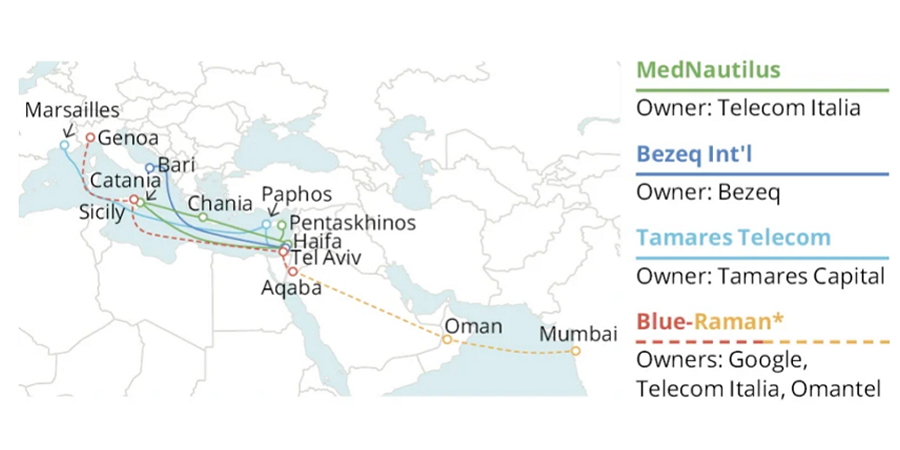 The Raman half of the cable will start in the Indian port city of Mumbai, run beneath the Indian Ocean and overland across an unnamed country, presumed to be Saudi Arabia, before ending at the Jordanian port of Aqaba. The Blue portion of the cable will begin in the Italian port of Genoa, continue beneath the Mediterranean, cross through Israel and end in Aqaba where it will link up with the Raman cable. The fact that the Blue-Raman cable is split into two is not related to technology but to geopolitics, so as not to give the impression that the “Israeli” part of the cable is crossing through Saudi territory.

Currently, almost all the submarine cables from Asia to Europe are running across Egypt, from the Red Sea to the Mediterranean. Technically, the crowded Egypt route increases the risk of cable fault and concerns on network resilience, the shallow water in Suez Canal makes subsea cables through this region vulnerable. On the other hand, Egypt is criticized for its high charges on the right of way for subsea cables passing through Egypt.

Sparkle revealed that its private BlueMed cable system shares fiber pairs in the Blue cable system. Sparkle’s BlueMed further extends by sharing the wet components of the Blue system and adding new branches in the Mediterranean.

Developing additional network capacity and routes is critical to Google users and customers around the globe, who depend on robust connectivity to power their online lives, and communicate with friends, family and business partners. Google users and Google Cloud customers will benefit from increased capacity and decreased latency to regions in the area.

Each equipped with 16 fiber optic pairs, the Blue and Raman Submarine Cable Systems are expected to be ready for service in 2024. In time, consortium members hope to make additional landings and connect the two systems through terrestrial network assets.

Like with other infrastructure projects, building a subsea cable is an opportunity to pay tribute to a regional luminary who has advanced human understanding. The Raman cable is named for Sir Chandrasekhara Venkata Raman, an Indian physicist who won the 1930 Nobel Prize in Physics—the first Asian to receive that honor in science. C.V. Raman’s work centered on light scattering, which finds that when light traverses a transparent material, some of the deflected light changes wavelength and amplitude. This so-called Raman effect is a foundational principle in the field of optics that enables any underwater network cable. A trip across the Mediterranean also prompted him to ask why the sea is blue, when water itself is clear? Thanks to C.V. Raman, we now know that the sea isn’t simply reflecting the sky, but because the water itself causes blue light to scatter.