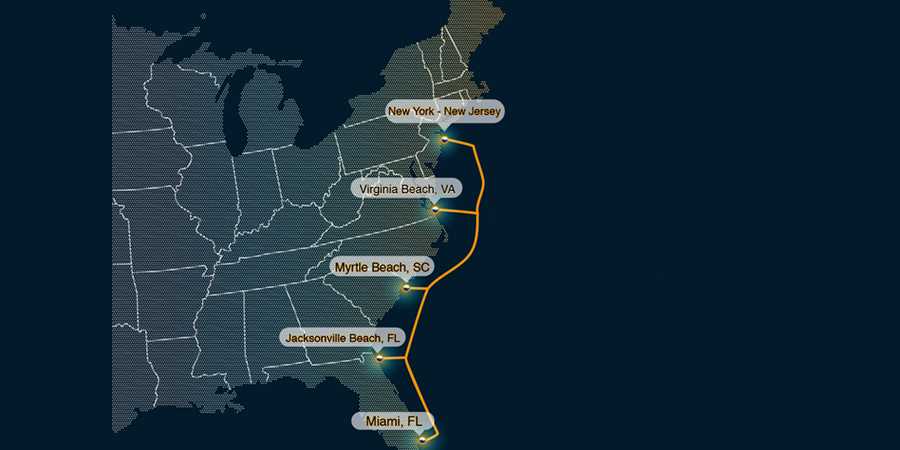 Confluence Networks has engaged APTelecom, a Consulting and service company specializing in global markets to serve as its Global Sales Partner to assist with the marketing and sales effort for a new ‘intra-US’ submarine cable system providing connectivity between the New York and Miami areas.

Confluence-1 will be the first undersea cable to serve as a diverse, more direct and more secure alternative to current terrestrial routes between New York and Miami. Confluence-1 offers two routing options, the first being an express path directly connecting New York with Miami and a second routing option, offering connectivity to strategically significant locations along the East Coast such as Virginia Beach (VA), Myrtle Beach (SC) and Jacksonville (FL).

Confluence Networks was founded in 2019 by a group of seasoned industry professionals Confluence Networks was established with the express purpose of building the first subsea system to interconnect key cable landing sites on the East Coast of the US – New York, Miami, Virginia Beach, and Jacksonville – and to develop an important new landing site in the Carolinas.  Confluence -1, will provide a direct, highly reliable interconnection among the existing and upcoming international subsea systems landing on the East Coast, meeting the need for a more robust alternative to the terrestrial routes between New York and Miami.

CONFLUENCE-1 plans to interconnect a number of international cable systems, including recently installed and planned systems owned by the market’s major players. These systems, already comprising over 1000 Tbps in capacity, carry traffic among the continents and islands bordering the Atlantic basin - North America, South America, Europe, Africa and the Caribbean.

"We are honored to be a part of such an important project and working with the team at Confluence Networks who have a very impressive set of established industry veterans building a game-changing network” said Sean Bergin, President of APTelecom & Chair, Board of Governors at PTC. "The demand for data continues to grow across the Atlantic and more diverse landings providing flexible routing solutions along the US East Coast to key Data Centre hubs makes perfect sense.”